Dutch fashion designer Ingeborg Steenhorst is specialized in costume design & wardrobe styling for adventurous souls, celebrities, show acts and especially rock and metal artists. Over the years she has created custom accessories, stage outfits and styling for artists such as

One of her most recent projects included customizing EMP clothes into exclusive stage outfits for Italian rock band LACUNA COIL.

“During an exhibition of my design work held in the artist backstage at Metal Female Voices Fest 2013, I was invited by Lacuna Coil and their record label Century Media to come down to London to style the band for their official ‘Broken Crown Halo’ photo shooting. Since I like the band and their music for many years now, I gladly accepted their invitation.

For the shoot we discussed to work with basic clothing selected by the band from the EMP catalogue. On location in London I would turn these basics into more customized outfits using screen print Lacuna Coil logo patches and art works. So my job started with creating screen prints from the art works I received from the bands bass player Marco ‘Maki’ Coti Zelati who is responsible for all the great Lacuna Coil art works. 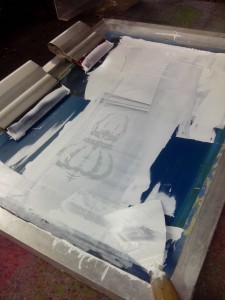 On October 26th, my car loaded with EMP ‘basic’ clothing, I took an early ferry from Dunkerque to Dover and from there I traveled on to London. Arriving at the same hotel where the band would check in, my assistant seamstress Fiona and I learned that the band would not arrive before 10pm. So we had time to grab some nice English ‘Fish & Chips’ dinner & a quick nap. Since we had already been traveling for 12 hours, that little bit of sleep was very welcome!

By 10pm in the evening a hungry and tired band finally arrived at the hotel. After they enjoyed a late supper we immediately started fittings with singer Cristina Scabbia. We selected the Ophelie maxi dress from the EMP collection for her to wear and combined it with an extravagant leather look couture coat from my own designer collection. The combination turned Cristina into a stunning dark rock Queen! 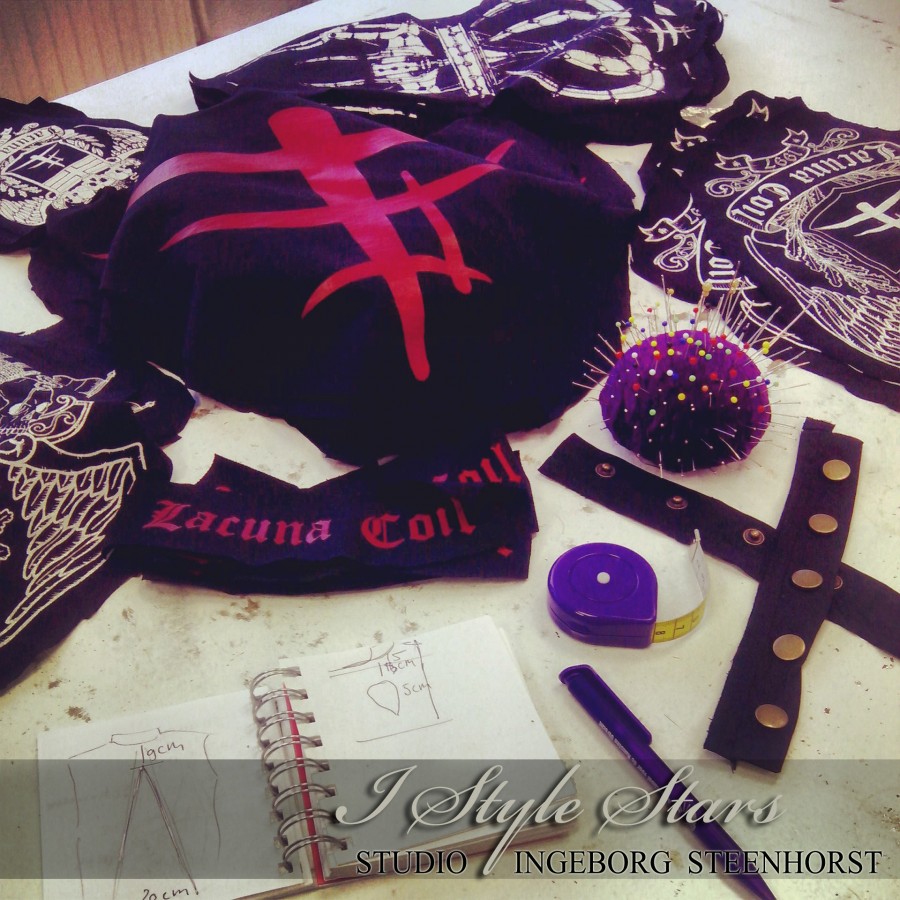 For the guys in the band we selected several cool looking items from the new EMP black Premium collection like the Denim Vest, and shirts as well as items from the EMP Gothicana collection.

When fittings were done and we had discussed all alternations for the basics like cutting sleeves and collars and where to add Lacuna Coil’s screen prints and patches, the customizing job could start. Over night my assistant Fiona and myself worked until morning to customize all basic clothes. Luckily we already had a nap earlier that evening so we managed to work the whole night through. By dawn we got to close our eyes for an hour! 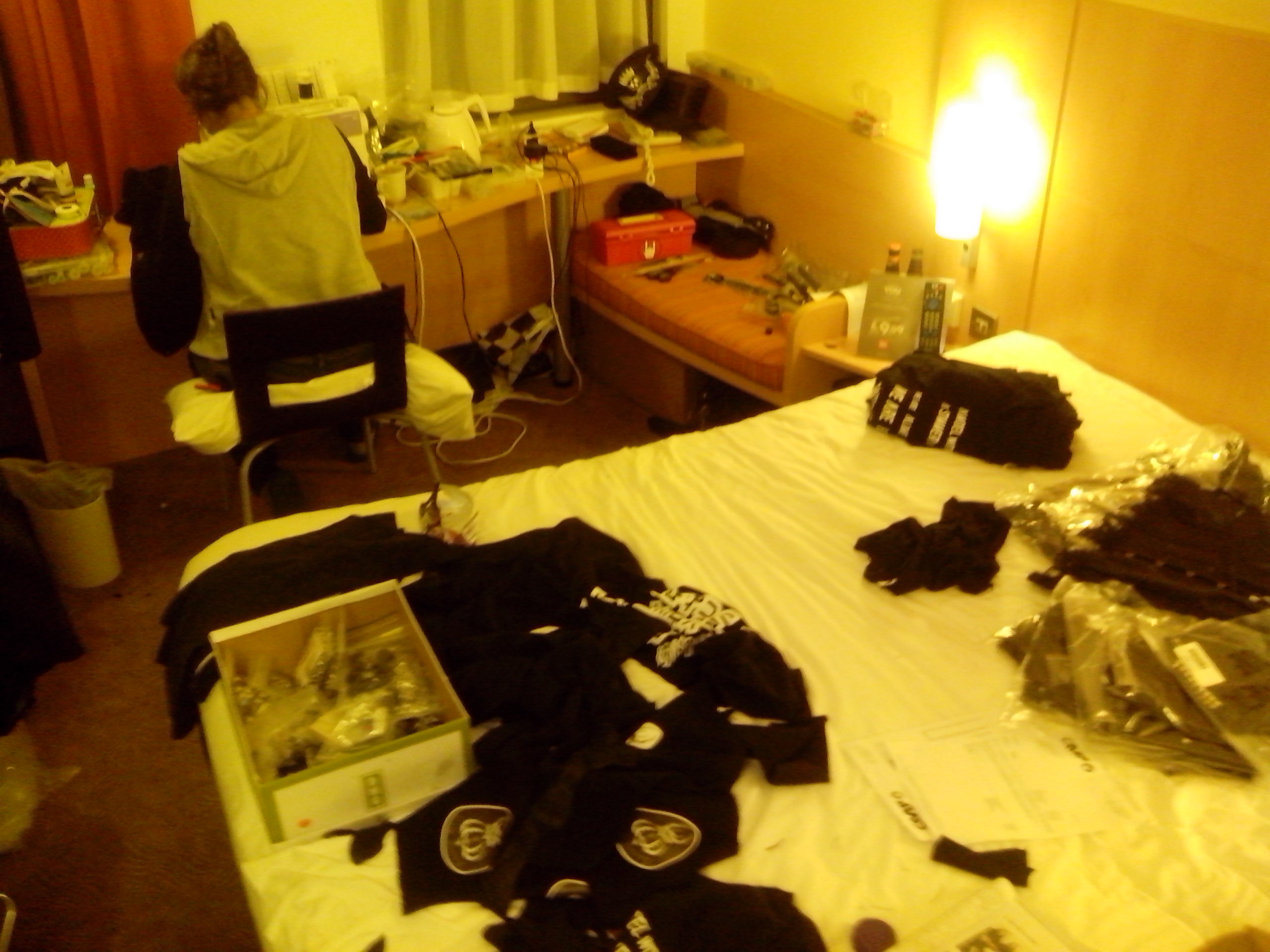 Our hard labor was followed with an exciting car ride through the center of London. The first photo shoot location was the awesome Murder Mile Studio. A large warehouse transformed into a photo studio with several smaller rooms in 1800 mansion style, fully equipped dungeon, white room & prison cell. As a dressing room we made use of the main studio room with a 7ft stainless steel mortuary table. It was quite funny to use a mortuary table as a working table for jewelery and accessory display! Photographer on duty is the American Steve Prue who has shot with Cristina Scabbia more often. During our inside shooting we did not noticed the severe storm going on outside, which caused huge damage all over the UK! After an exhausting but fun shooting day we joined Lacuna Coil and photographer Steve for a nice dinner at the hotel before drifting off into a coma-like sleep! 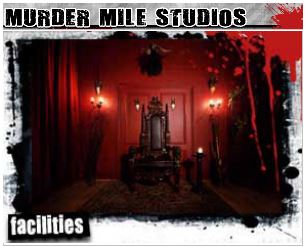 On the second day the band had a shoot planned at the ‘Asylum’, a former Chapel in Peckham, London. Gutted by an incendiary bomb during WWII the chapel has been patched up over the years and since 2010 was in use for exhibition space, events and as a location for film and photography. The place has an astonishing atmosphere because of its beautiful stained-glass windows and fascinating collection of carved stone funerary monuments. You can imagine what great band photo’s could be created in such a unique building.

The chapel was located next to a retirement home. So our dressing room for today was actually located within a house for old and retired people! Not very rock & roll, but at least it was warm in there, something which could not be said about the chapel! Cristina and the guys had to endure a lot of cold during this shoot, but the final results are stunning! 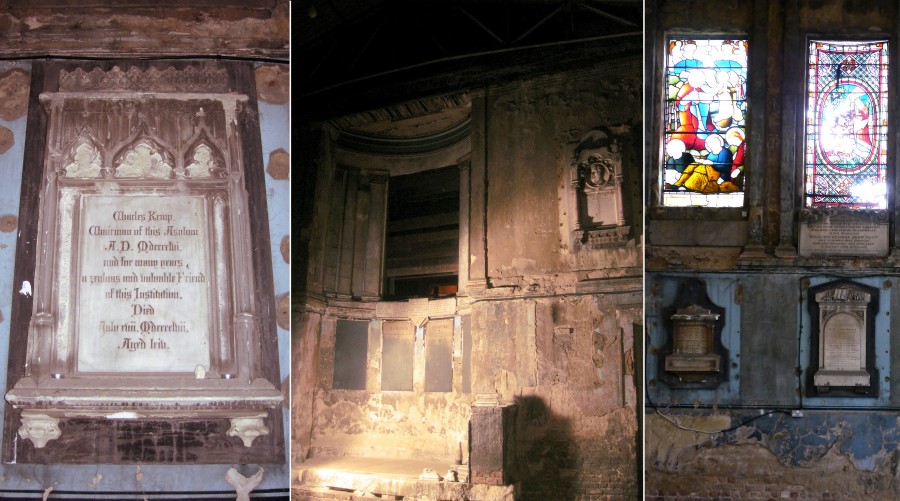 Obviously, I was pretty limited in what I could create over night having a hotel room as an improvised design studio. Therefore after the shoot was done, I took the EMP Gothicana shirts back with me to my design studio in the Netherlands to continue working on them.

The band asked me to customize the EMP shirts into stage outfits with a unique military Lacuna Coil look, and so I did!

Via email ‘Maki’ and I discussed the final design and after I got a green light I started cutting, sewing, coating and decorating the basics.

After many hours spent on adding hand painted coatings, patch and trim stitching I now bring you to the end of my styling adventures and present you with the final result of the EMP shirt transformation:- a unique Lacuna Coil ‘Broken Crown Halo’ military jacket! 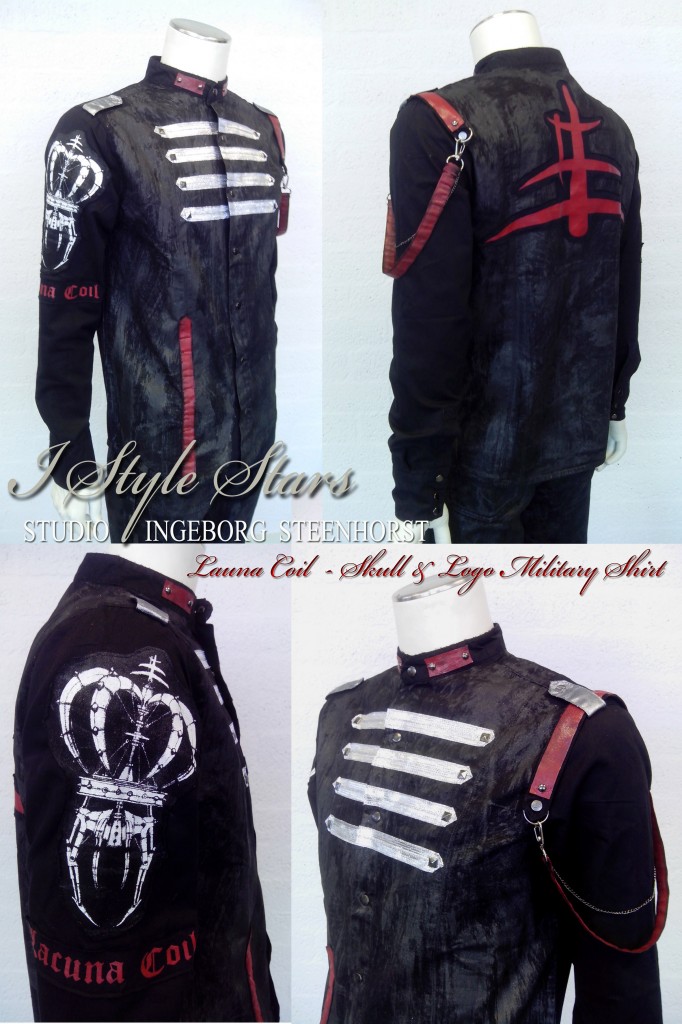