We were lucky enough to get an interview with the awesome Mikkey Dee, Drummer from Motörhead

Question: How are you?

Mikkey Dee: I’m fine, I still live in Sweden. I arrived in France yesterday and the trip was hectic, last night we did some TV stations and hung out until ten. Today is full of interviews and I go back to Sweden tonight.

Q: You are staying in the beautiful Paris Hotel?

Mikkey Dee: Yes its OK Rock’n’Roll is still alive. I can think of a worst situation.

Q: You’re Swedish and the band is British, but Lemmy is in the USA, how is that?

Mikkey Dee: The world is our stage you know what I mean; I lived in the States for over 11 years. It doesn’t matter where you are from really because we tour so much anyway, our tour bus is our connecting point.

Q: I’ve heard a lot of rumours about Lemmy’s health, how is he doing?

Mikkey Dee: He is much better and he is recovering in L.A. and you know, the doctors told him to rest. He is doing fine and preparing himself for the next tour, like we all are, it’s still far away. It is a month and a half until we actually start the new tour, so he has plenty of time to rest.

Q: What gives you the energy to keep on going with Motörhead?

Mikkey Dee: We are just in love with what we are doing; you know we just refuse to stop. It’s hard to explain why you are doing things but it’s in your blood you know. I could not explain to you why I have to eat or why I have to sleep … I really don’t know. I know I go crazy without it but it’s the same with music and touring. Especially when the 3 of us in the band are doing so well together, we are such a good family. There is no reason to stop unless you have to for different reasons. So it’s hard to explain why really. We all know: this is what we know this is what we do.

Q: I was blown away by the new songs, you have increased the quality and the energy of Motörhead?

Mikkey Dee: Yes I totally agree, we have a very nice feeling about this album. I give Cameron Webb a lot of credit here too. He is not the kind of guy who comes in and says “I know how Motörhead should sound” that’s not the case with this guy at all. He is like in a way the fourth member of the band. He doesn’t write anything but he is there to tell me that I suck on drums when I do, he can hear that and he can tell Lemmy “No that melody is not good here”. (IN A VOICE IMITATING LEMMY) “Yes it is I’m not changing it”, you should change, it’s shit you can do much better! “Arrhhhh!” (IN LEMMY’S VOICE) then he does and it’s much better. He just pushes to the limit where we sound really good. He is a very confident, capable producer you know. He did 5 albums with us which is unbelievable, you know “Inferno”, “Kiss of Death”, “Motörizer”, “The Wörld is Yours” and now “Aftershock” and really those five albums really go hand in hand with each other, it was a very big step up for Motörhead when Cameron Webb came in with “Inferno” which is one of my favourite albums.

Q: Lemmy says that “Aftershock” is your best album since “Inferno”?

Mikkey Dee: He feels that and I like to say I don’t know yet. I want a few years to go by because I can’t say it the best we have ever done. I have a very nice feeling about it and I think it’s one of the best albums we have done. But I don’t know if it’s the best one yet. I need more time, if we talk in four of five years I can tell you I’m very much sceptic about saying “This is the best album of Motörhead” I don’t know, it’s a great album, I know that.

Q: When exactly did you start to record this album?

Mikkey Dee: Well we started in February 2013 writing the songs and then we recorded right after that when we had the album done we flew back to L.A. me and Phil and wrote back some more new songs and finished the album this summer actually. Lemmy came back from the Festival Tour when he was sick and did some more work on the vocals, so it just got finished now.

Q: Did you come up with the title of the new album?

Q: How did you create the new songs?

Mikkey Dee: Yeah me, and Phil Campbell try to take the songs musically as far as we can and then Lemmy writes the melodies and words, lyrics and we all piece it together. Lemmy is writing music too of course but we try to take the songs as far as we can. At the end we have done the same amount of work. It’s just a different order how to do it really.

Q: Is Phil Campbell taking part in the promotion?

Mikkey Dee: He just doesn’t enjoy it that much, he is more of a quiet guy when it comes to the press so it’s a more a natural thing that me and Lemmy doing the promotion of the band. Probably me, most of the time. I talk the most.

Q: How did you design the front cover?

Mikkey Dee: We all gave different suggestions, we got suggestions from others… it’s a normal procedure really. And what I liked with this one is, I like that for a change that it’s not a black cover, I like that it’s more brighter colours this time, it’s gonna look good as a backdrop on stage, it’s gonna look good on a T-Shirt, it’s a nice cover and the skull looks fantastic, it’s almost melting. It’s a little different approach, “Inferno” was also a very nice cover with its exploding Motörhead skull, I love the “Inferno” cover there is more colours that’s not only black, dark and cold colours. So this is really “After the Disaster” you know. 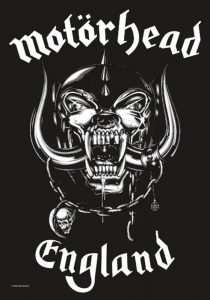 Q: Will Motörhead be the sole survivors of Rock and Metal after the disaster?

Mikkey Dee: I believe we will, we are gonna stand tall you know, and when this crazy planet falls apart, when we are invaded by the Aliens the only things that will be left is fuckin’ Motörhead and cockroaches. That’s it you know.

Q: Some more private questions now, when did you start playing drums?

Mikkey Dee: I started playing drums when I was around 5 years old, I came from Gotenburg, Sweden and moved to L.A. for a long time, obviously I will live there again. I’m from a drum family; we had 4 drummers in the family, all playing drums, no guitars, no vocals, no keyboards, sole drummers. So it was kinda fun, yeah I have played drums all my life. The first real band I played in was a Swedish band called Nadir, we toured a lot with Nadir but it was more Pop Rock in Sweden, I was doing all the booking and my Mum did all the economics. We did great then I moved to Copenhagen and we formed the band called Geisha. After Geisha I started to hang out with Michael Denner and Timmy Hansen from Mercyful Fate … and then the band was splitting and they asked me to join King Diamond. So I left Geisha and joined King Diamond and now we are here.

Q: You have worked with two icons of Metal: Lemmy and King Diamond, tell me more?

Mikkey Dee: They are very original guys, yes, they are very much alike. We are such great friends with King Diamond, and we had a fantastic trip, I wish to have had more years with them, we would have played longer together, it was fantastic and it was the first real international thing that I did. We were a great bunch of guys, and for me unfortunately it ended too soon with the band. I wanted to move along; I did not want to play that kind of music at that time anymore.

After playing with Dokken for a while, who are dear friends and being on a fantastic tour, I was missing the heavy stuff, and I knew where my heart was. I knew Lemmy since the mid eighties because we toured together with King Diamond and Motörhead. Lemmy was so much alike King Diamond in a way of being very unique and a very “strange man” in a way, you know very special, forward fella it was just this way or a highway. And I loved that, Lemmy never compromised his music, King Diamond never did either you know. King Diamond wanted to write what he wanted to write and knew what the band’s what gone be…a lot of people came in and thing you should write the songs like this and he replied “Fuck Off” and the same goes with Motörhead! So I was very happy when actually I joined Motörhead. I was back in the Heavy Division.

Q: At EMP your T-Shirts are selling endlessly.

Mikkey Dee: Definitely it’s a long term job, the band is 38 years old and I have been in them for 22 years now and time is taken. I’m very happy that can still produce a new album and write songs like we do. It’s great music on the new records. As you all know we are not making any money out of the CDs. It absolutely helps us when fans buy a Motörhead T-Shirt because we want to still be around and we want to tour. Bands have to tour a lot more now because their income from albums is very low now really. Albums have depth not so such for Motörhead because we never sold enormous amount of records but it is different today you know. Today of course you have to sell more merchandise; it’s just a balance, if the band is able to continue touring. Everything goes up with life and concerts ticket prices goes up too unfortunately. You have to recover you income loss in a lot of ways. And merchandise is great to buy a nice Motörhead T-shirt with good quality is great. If people can spend 2000€ on a fuckin’ Dolce Gabana T-Shirt with not spending 30€ on a Motörhead T-shirt. You don’t have to; but it helps us. And don’t forget Motörhead is the coolest logo ever. It represents something, it stands for something.

Q: Do you drink Jack Daniel’s yourself?

Mikkey Dee: Not that much anymore, I try to stick to beers because I got a hard job behind the drums and I like to go party after the shows. And if I drink harder alcohols like whiskey or Vodka I feel like shit the next day. One of favourite beers is a French one, the Kronenboug 1664. Backstage in my dressing room most of the time it’s 1664.

Q: Any last words for the EMP Maniacs?

Mikkey Dee: All I can say is we are looking forward to the Tour and I look forward to the gig at Paris’s Zénith venue on November 9th. I hope you will be there and see a good show. I wish it could be a little later into the tour.  I wish we had 6-7 shows before Paris, but it’s the second one of the new Tour this year, It’s how it is! Thanks a lot. Excellentio !