Jason Newsted took some time out to talk to us about all things Newsted. Back with a  new band and a new album that has a killer metal sound, simply titled ‘Heavy Metal Music’, we were eager to meet the ex-Metallica bassist and see how the new tour is going and what the new album is all about…

Your album is due out on August 6th. It will include 2 of the 4 songs from the EP. Why two and why these two?

Usually an EP is supposed to be a sampler of what the LP is going to be. We had a lot of music to choose from and lot of songs to choose from, so I wanted the Metal EP to be an instant classic. I wanted it to be the only place when you can only get those songs, to make the EP special.

“Soldierhead” and “King Of The Underdogs” are the ones that, as a band and with our management and agents, we decided would be the best fit from the EP to be included with the new music that we are going to make for the LP.

“Heroic Dose” is a really strong and powerful. What about the other tracks?

Newsted will be on Gigantour with Megadeth and many other bands and will play in many places, in the USA and Europe. What are your feelings and expectations for this tour?

One of the most important things for me in this situation is to have reasonable expectations. I don’t have any prediction of anything other than what happens. I’m not like “this is going to be THE big fricking thing” and  ”tons of people,  tons of dollars and blahblhablah”. I don’t have any of that. Whatever happens, happens. People like it, they appreciate us, they come to the shows, they buy t-shirts, buy the records, whatever. That’s fine.

Dave Mustaine recently declared that he would perform some Metallica  songs with you. Do you think it will happen?

There’s been talk about it but I haven’t talked to him personally about it yet. I’m open to anything. I’ll jam just with anybody at anytime.  I’ll play whatever he says!

In the past you performed in many places, especially festivals and big arenas. Now you are playing in much smaller clubs. What do you prefer?

If I had to pick one I would take the “100 Club” in London and just take it all around the world. And just play for 300 people, 300 people, 300 people, 300 people with the perfect sound system. That’s if I had to pick one but, fortunately for  us, we have some arena shows and we also have clubs, 20.000 people at a festival, a few hundred people coming here today, 8.000,  10.000, 30.000 people at other shows. To have an army of people singing loudly together, that’s beautiful, of course, with a lot of energy, that’s powerful..but in a club I can see everybody’s eyes. And they can see all my faces, and gestures, my growls…! They can see me and I can see them. So, there is a beauty in that purity like… you know, the love, the family love? That’s valuable.

When did you meet Jesus and Jessie and why did you choose Mike Mushok as the 4th member?

Jesus and I met at the end of the 90s when he was with Metallica for a while. He was also drum tech on the Echobrain tour. We have been playing music for 10/12 years together so the experience we had together is the most valuable thing. Nothing can replace the hours and hours spent together.

Jesse Farnsworth…he’s probably been playing about 10 years with Jesus as well. So they had that time too.  Mike joined us about 4 months ago and we completed the LP in 3 weeks! He came to cover his part on already existing songs.

We put the word out that we were looking for a guitar player. We had a lot of people that wanted to try out but we narrowed it down to just a couple of people. So there were two people to try. And Mike was the one. He was very able and he was the guy.

For me it’s not just a project. He’s here not just to help, he’s not here just for the tour, he part of the band.

He is also in a band called Staind and when they need him again he will continue to play with them. But he’ll always be in our band. And I won’t continue our band without him. So…he’s going to exist in both bands, like I when I was in Voivod and Ozzy at the same time, or whatever, like that.

The 3 of them are showing me support that I really haven’t felt before. You know, those kind of happy vibes, brotherly support, things that are really very healthy for me now. 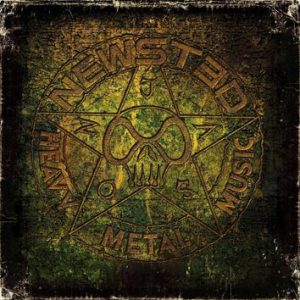 Tracklist:
1.Heroic Dose
2.Soldierhead
3….As The Crow Flies
4.Ampossible
5.Long Time Dead
6.Above All
7.King Of The Underdogs
8.Nocturnus
9.Twisted Tail Of The Comet
10.Kindevillusion
11.Futureality