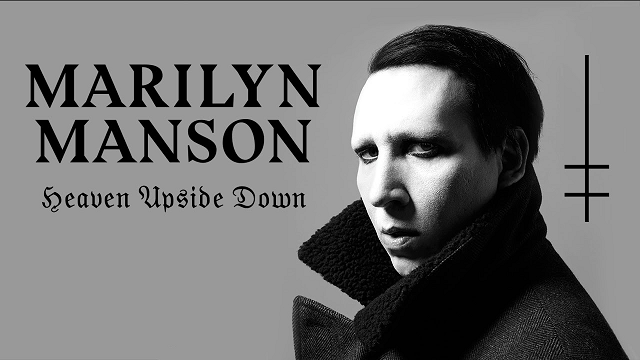 Everyone’s favourite shock-rocker is back, with a clutch of new songs that will neither surprise nor disappoint long-term fans. Marilyn Manson’s latest album, Heaven Upside Down, was originally scheduled for release on Valentine’s Day earlier this year, so it’s been a long wait for those of us hungry for a new slice of industrially-tinged sex, drugs and rock ‘n’ roll.

After close to three decades of shocking parents and teachers, Marilyn (real name Brian Warner) shows no signs of settling down with a pair of slippers and a cup of tea quite yet. With his usual smudged eyeliner and oiled-back hair firmly in place, Manson snarls and hisses with the same mixture of sneering detachment and distaste for the mainstream throughout the ten new tracks. The good (or bad) news, depending on how you see it, is that not much has changed here. Manson still combines whispers, harsh and clean vocals more seamlessly than the countless copycats he’s spawned during his reign. The subject matter still encompasses sex, drugs, murder and anti-conventionalism, and the music still pulses with the bassline of an underground club and the riffs of a band that know how to meld metal and electronic music in their sleep.

None of that’s to say that things are getting boring, though. If you’re a Manson fan, there’s plenty to get your teeth into. ‘Say 10’ (the original title of the album) channels Nine Inch Nails for a whispery industrial track that creeps along at a slow and menacing pace towards a typically irreverent chorus that riffs off his image as a kind of tongue-in-cheek antichrist for the modern era. ‘Revelation 12’ brings in some faster and more aggressive guitars that leave you wondering whether to dance or smash things, whilst Manson’s trademark drawl receives a distorted overlay that threatens to bring the tune into EBM territory. My personal pick from the album.

As fans of classic Manson know, the band does danceable grooves just as well as it does buzzing, distorted riffs, as evidenced more than satisfactorily by ‘Tattooed in Reverse’ and the melodic yet creepy ‘Kill4Me’, slower yet no less catchy. Some of these songs will be stuck in your head by the time you’ve finished listening, just to warn you.

In his own words, Manson intended the album to ‘f*** sh** up’ rather than change the world, and this is pretty much the effect he has achieved. Over a long career, Manson has already said everything he needs to say, kicked over as many cultural icons as he possibly can and shocked everyone who needs to be shocked. Now it’s time not to sit back and relax but to bring together all the best bits of the band’s sound and enjoy the madness. A lot of the swearing, subversion and Satanic imagery are still there, but they’re more like a part of the scenery for one really f***ed up party. Marilyn Manson won’t ever go back to the heady heights of Antichrist Superstar or Mechanical Animals, but that’s no reason not to crank this one up and enjoy!

Marilyn Manson are supporting the album with an extensive Europe-wide tour, ending up in the UK in December despite Manson’s close encounter with a gun-shaped prop in a recent show, which he is said to be recovering well from.Check out the album, pick up some merch and we’ll see you at one of his shows in the near future!