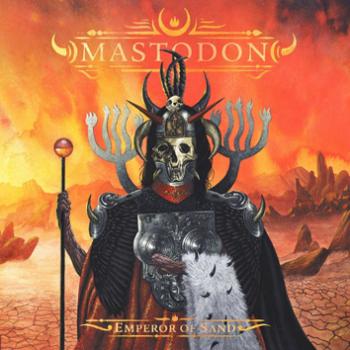 Mastodon’s long-awaited seventh studio album is now available on CD and vinyl. But what did we think of “Emperor of Sand”?

Despite the hype that surrounded Mastodon around the time of the release of their second album, the epic concept piece Leviathan (available today from EMP on CD), it took me quite a while to jump on the bandwagon. The band’s sound in the early days still tended towards a heavy and discordant edge, which lacks the catchiness and melody that they discovered later on. However, everything changed when Crack the Skye (CD | CD & DVD | limited edition coloured vinyl) finally came along. I now consider Crack the Skye to be one of the finest metal albums ever produced, with a merciless sophistication to the songs from start to finish, without one single moment that fails to overawe the listener.

Fellow fans of the Crack the Skye era are in for a real treat with Mastodon’s latest release; Emperor of Sand might just be the Atlanta troupe’s finest creation since.

Whilst their previous two albums, The Hunter (CD | vinyl) and Once More ‘Round the Sun (CD | vinyl) played on the catchy and groovy side to the band that goes down extremely well at festivals, Emperor of Sand has delved back into the past and resurrected some of the more interesting parts of Crack the Skye and even Leviathan for our listening pleasure. I’d already venture to say that this is going to be one of the top albums of 2017 – it absolutely rocks from start to finish, bringing a spectacular maturity and polish to their style, which seamlessly combines grooves with heavy segments and gloriously catchy chorus structures.

The album opens as it means to continue with the first single “Sultan’s Curse”, which immediately sounds like something from Crack the Skye, with meticulously-crafted riffs which blend seamlessly into the doomy chorus. As usual, the variety of vocal styles here (each of the band members contributes their own unique vocals to the mix), turn this into something special, creating a mystical atmosphere, which is set to reappear at intervals throughout the LP. The upcoming second single “Show Yourself” doesn’t mess about either, with pretty much no foreplay before hitting you in the face with melodic vocals and groovy riffs. The clean(ish) melodic vocals feature heavily across the album, which may not sit so well with fans of the heavier early style, although generally speaking the album isn’t quite as radio-friendly rock-ish as parts of Once More ‘Round the Sun. Genuine, Leviathan-esque discordance reappears with a vengeance on “Andromeda”, reinforcing the band’s heavy credentials for those who tend towards seeing infectious catchiness as a failing, rather than a triumph. Nonetheless, the songs have gotten shorter and more self-contained. You’re not going to see any 12-minute conceptual epics here. Each song is its own perfectly-formed musical unit, which you can either see as evidence of selling out, or simply strap in and enjoy the ride. I recommend you do the latter.

Mastodon have returned to semi-conceptual territory here, with the album’s protagonist cast out into the desert, paving the way for a lot of sand-related metaphors for the passage of time. It’s also been noted by many that a series of personal tragedies in the band members’ lives form a backdrop to the album, lending weight and depth to the exploration of the theme of life and death. The inclusion of slower, darker and sludgier tracks like “Steambreather” to some extent counterbalances the faster and even poppier tracks like the much-maligned “Show Yourself”, which seems to have hit a sore spot with some traditionalists. However, heavier moments do lurk on tracks like “Roots Remain” and “Scorpion Breath” – albeit often so cleverly woven in with energetic rock and funky riffs that if you pause too long to admire the high-octane choruses you might miss them. It’s a sound that Mastodon have been crafting for years, which was perhaps over-refined on Once More ‘Round the Sun, but has found a real balance on Emperor of Sand. The band may have lost the more far-out progressive element and the harder side, but they’ve essentially perfected their formula for combining heavy metal, prog, stoner, doom and radio-friendly rock in a way that brings all the disparate elements together into something that sounds so cohesive you just can’t imagine it being any other way. I personally don’t think there are many bands out there right now who quite so noticeably at the top of their game. Give this one a spin, you won’t regret it.

Emperor of Sand is available to purchase now from EMP on CD and vinyl. Also available is a 61×91.5cm poster and a t-shirt of the album’s striking cover artwork – see our Mastodon merchandise and albums page for the full range!