10 Best Gifts For Metal-Heads This Christmas

Do you have friends or family with head-banging tendencies? A power metal pal, a symphonic metal sister or a death metal dad perhaps? Or maybe you live with a pet metal-head you need to feed riffs and blast-beats to at least twice day. Whatever breed of metal-head you’re finding gifts for, we’re bound to have something to offer in our huge range of metal band merchandise. Let’s begin!

Now a band’s popularity definitely doesn’t always equate to how good they are but in Metallica’s case, they’ve legitimately earned their iconic status with consistently compelling live shows and several classic, genre-defining albums. You’ll also be hard-pressed to find a metal-head that doesn’t like Metallica – they’re just one of those bands!

Of their genre-defining albums, ‘…And Justice For All’ is definitely one of their best and the album art, depicted on the t-shirt, is awesome. Plus it’ll give your metal-head an excuse not to wear black for a change! A tanktop version of the shirt is also available – check it out here. 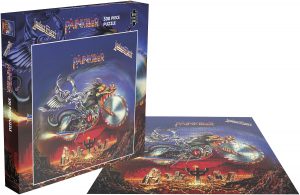 Another genre-defining album is Judas Priest’s Painkiller. It’s impossible for a metal-head not to have the utmost respect for the legendary band that has been rocking out since the 60s and is still going! What better way to spend Boxing Day than by listening to Painkiller at full-blast whilst sipping a cup of tea and doing a puzzle of the album cover?

I also saw Amon Amarth earlier this year and they engaged the crowd more than almost any band I’ve ever seen! A truly solid band that pretty much invented the Viking Metal sub-genre. Limit the time your metal-head needs to go without repping their favourite bands by giving them something truly ‘metal’ to wear as soon as they get out of the shower. It even has a Viking helmet hood – you can’t get much more metal than that! This is one of our EMP exclusives so make sure you get it while stocks last.

Speaking of things which are ’metal’, I bet you haven’t spent a single Christmas with your metal-head without hearing her/him saying ‘Hail Santa!’ at least once. Now they can wear it on their Christmas jumper – a Ghost one nonetheless! 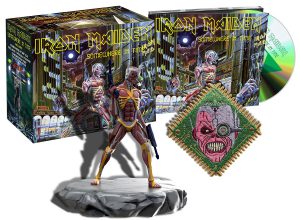 An epic deluxe edition CD of an epic album by one of metal’s most epic bands. Possibly my favourite Iron Maiden album but it’s a hard choice. I certainly would not complain if I received this for Christmas myself – how cool is that Somewhere In time Eddie figure!? 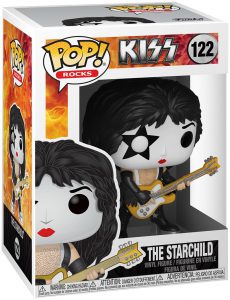 The legend that is Paul Stanley A.K.A The Starchild from Kiss! Cute but still metal as f*ck – love it!

Hoping to give a Slipknot fan a merry maggot Christmas? Help them keep warm in style with this EMP exclusive Slipknot jacket! 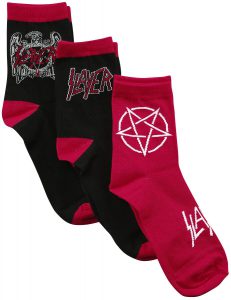 Satanic Slayer socks anyone? Yes please! Some people say that socks are a poor stocking filler but I’d have to disagree – especially when they’ve got pentagrams on them!

Mum a Motörhead fan from back in the day? Know someone else that would love a Motörhead dress? We’ve got the perfect gift for you!

Ok I know we’ve covered Slipknot already but they’re just such a sick band and let’s be honest – have you ever seen leggings look this metal? As Slipknot fans it’s our duty to take any opportunity to show the world that We Are Not Your Kind!

Hope to have helped in your search. Let us know what you think of our selection and, above all, have a very metal Christmas!