Harry Potter – Hogwarts Mystery: What We Know So Far

So I’m sure you’ve heard the news by now that this year is going to be the best year ever. Why’s that you ask? Because there’s a new Harry Potter game – Hogwarts Mystery – coming to smartphones!

There hasn’t been a Harry Potter game released in 6 years so when JK Rowling announced it on Pottermore, we nearly lost our minds!

What we know so far:

Players create their own Hogwarts student and live life at the Wizarding School between Harry’s birth and his admission to Hogwarts.

They can go to classes (I definitely would like to go to the Boggart class!), learn skills of the magical kind (Accio please) and make friends or enemies with other students.

Players can make decisions for their character influencing their journey through Hogwarts as they develop as a wizard or witch.

There will be familiar faces including Professor Snape, Mr Ollivander and even Fang!

Check out the latest trailer below:

The game will be created by Jam City in partnership with Warner Bros. Interactive Entertainment. They set up Portkey Games label last year which is the new Wizarding World games label. On Pottermore it was announced that they will “work with talented creators to build games that focus on player-generated stories, which will live alongside the magical universe created by JK Rowling.”

The CEO and co-founder Chris DeWolfe says “this game is a labour of love for our developers and artists, who are dedicated to creating the most magical entertainment and game play experience for everyone who adores J.K. Rowling’s Wizarding World.”

Hogwarts Mystery will face competition: mobile game developer Niantic who developed Pokemon Go are planning the release of Harry Potter: Wizards Unite this year. It will use the same augmented reality technology as Pokemon Go to superimpose the magical world of Harry Potter into our very regular real world.

It sounds like us Harry Potter fans have a lot to look forward to this year – I can’t wait to see what wand Ollivander chooses for me and trying to avoid disappointing Snape!

Harry Potter: Hogwarts Mystery will be available via the App Store and Google Play in 2018. Until then get ready for the game release with our Harry Potter merch! 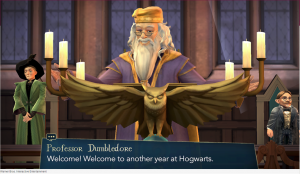