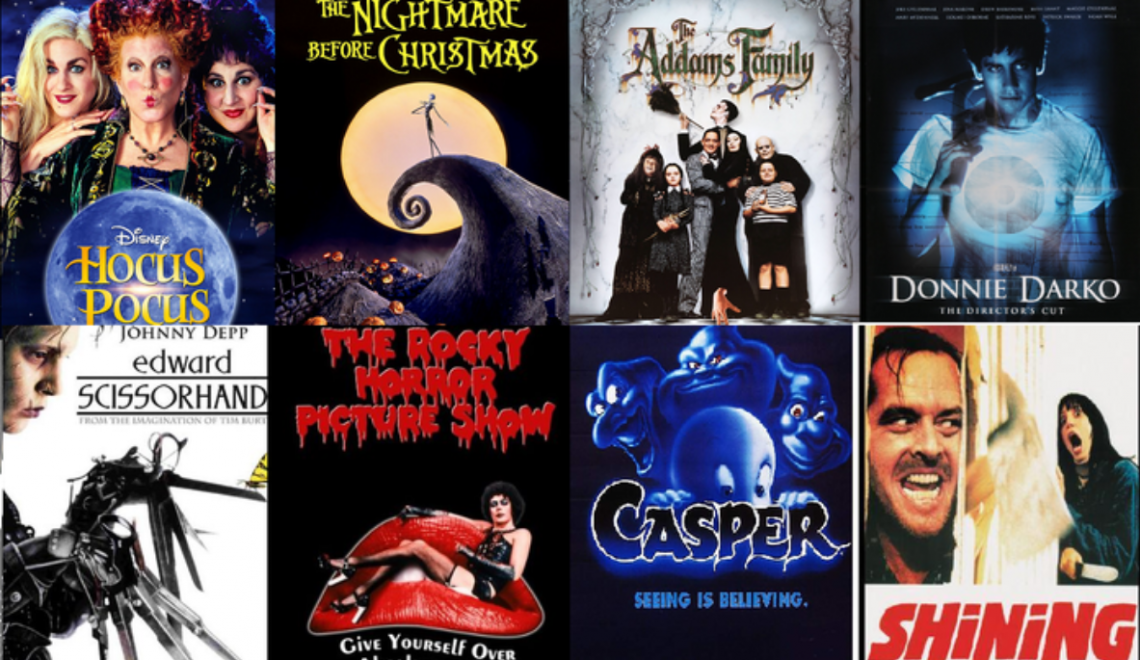 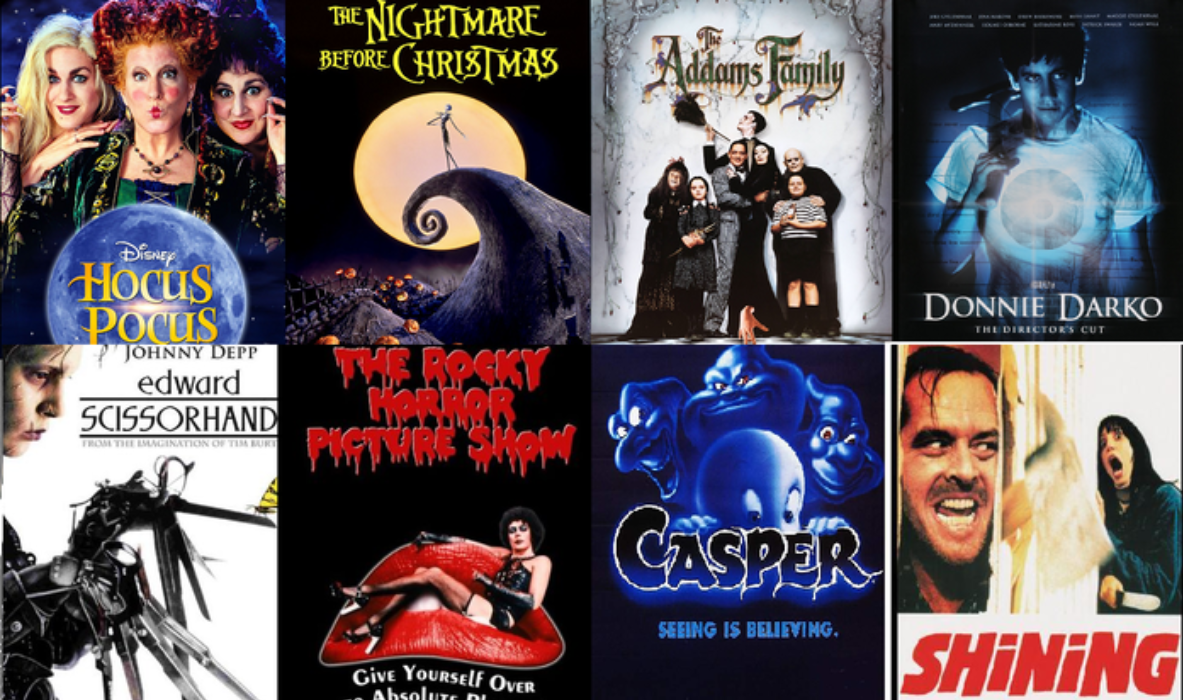 Halloween is my favourite holiday ever! I’m one of those people that start thinking about their costume mid-summer and share “is it Halloween yet” memes in May – if you follow our Instagram you might have noticed – soz!

I just LOVE being creepy and there’s nothing as exciting as spooky season for me and the build up to it is just magical (even more than Christmas, my birthday, 4 puppies with red ribbons and a trip to Disneyland all together!) – cause basically Halloween is not just a day – it’s a season: 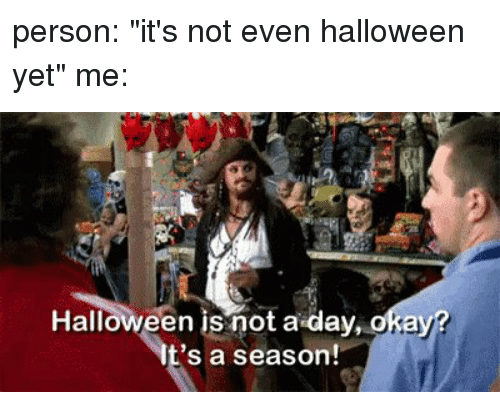 Just think of the autumn colours, leaves on the floor, pumpkin spice lattes… It’s also more socially accepted to wear black or dark lipsticks and be pale (let’s face it – when you’re too pale in summer you will always get that person making jokes about your skin tone to which you have to politely answer with a fake smile and a “funny, very funny! Never heard the joke about vampires/burning/or if I’m Marilyn Manson’s daughter before”) and it’s an excuse to buy new cosy jumpers and hoodies, boots and coats.
Plus the colder weather doesn’t make you feel as guilty for spending your evenings or days off indoors gaming, reading or watching horror movies to get into a creepy mood and look for Halloween outfit inspo.

So on the run up to Halloween I just love to keep some free time in my evenings or weekends to snuggle up with a fluffy blanket and cosy pyjamas and simply eat tonnes of junk food and watch all my favourite creepy/spooky or simply Halloweeny movies. Plus let’s say it, it’s great to avoid people and not have to be sociable from time to time: 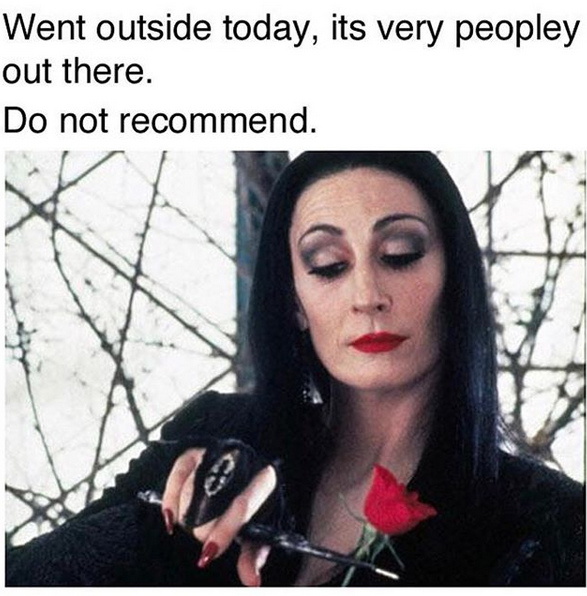 Here’s a list of the movies you MUST see to get in the right mindset for the best night of the year! I’ve tried to keep the list mixed, with a variety of horror movies, animations, comedy horror etc.

The Shining, a film based on Stephen King’s horror novel is simply a masterpiece – I’m sure I don’t need to sell it to you! And any occasion is good to re-watch this Stanley Kubrick wonder featuring an outstanding Jack Nicholson and a series of creepy scenes that are simply perfect to get you into Spooky Mood – Room 237, the Grady daughters, Danny and his tricycle are waiting for you at the Overlook Hotel. 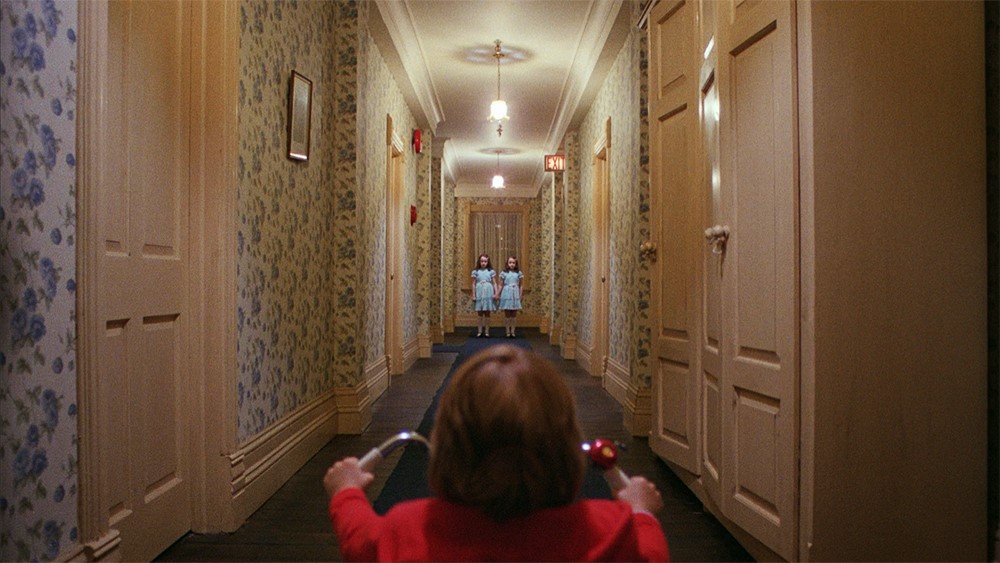 Who said that Halloween movies have to be scary and bloody forcing you to sleep with the light on for a week??? You can get in the perfect Halloween spirit with something light and funny like Hocus Pocus. Of one thing we’re sure – this Disney classic featuring Bette Midler, Sarah Jessica Parker, and Kathy Najimy as The Sanderson sisters is going to make you laugh! 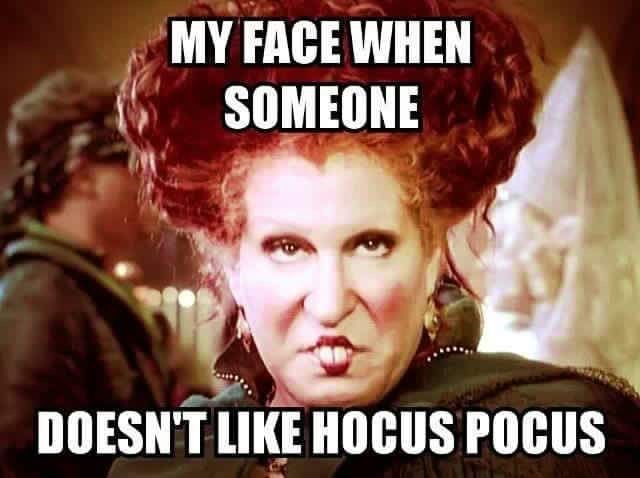 I used to be terrified of this movie growing up – and even if I’ve seen it a few times in the years I “watched” most of it hiding behind a pillow. I think this year is going to be easier to watch this Wes Craven classic (and enjoy the short appearance of Johnny Depp) thanks to Rick and Morty! I can’t un-see Scary Terry now – “You can run but you can’t hide, bi***!”. Sorry Freddy Krueger. 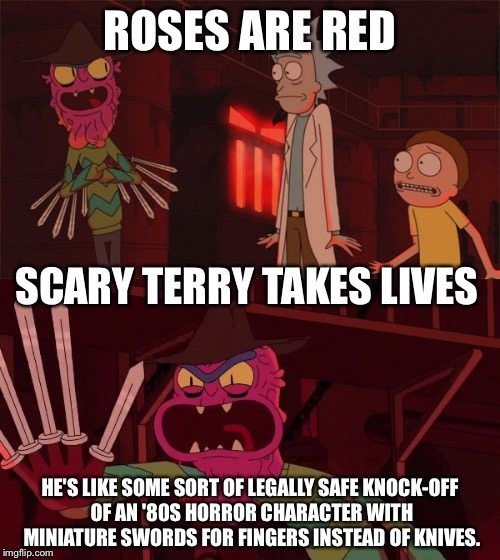 Check our A Nightmare on Elm Street merch here.

The Nightmare Before Christmas (1993)

Like every good little Goth growing up I must have watched this Tim Burton classic at least 784837 times!
At some point I had a DVD that gave me the option of changing the language and I remember watching it in Italian, Spanish and French out of curiosity to see if the songs sounded better (the Italian ones are pretty cool, sang by an Italian singer called Renato Zero who looks just like Professor Snape! Google it if you don’t trust me).

But the best version of the song ‘This is Halloween’ is not in Italian, Spanish or French. And it’s not even the original… it’s this awesome cover by Marilyn Manson taken from the album Nightmare Revisited.

Check our The Nightmare Before Christmas merch here.

There are many reasons why I LOVE this movie: it’s extremely funny thanks to its dark humour, Angelica Huston as Morticia Addams and Christina Ricci’s Wednesday simply mirror exactly how I feel towards people 98% of the time and gifted the world with meme material for the rest of our lives. You’re welcome, Internet. 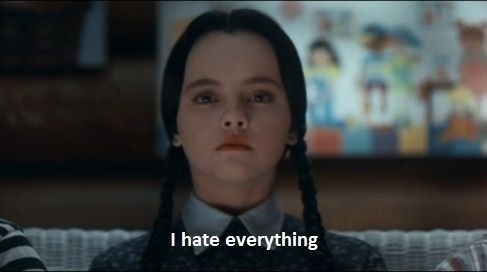 Oh dear Tim Burton, thank you for this movie! It’s simply one of the greatest movies of all time.
Did you know that Winona Ryder and Johnny Depp were happily engaged at the time they were filming this movie? That probably helped portraying the love and connection between Edward and Kim.
Also, am I the only one that is still upset about these two breaking up?!? #WinonaForever. 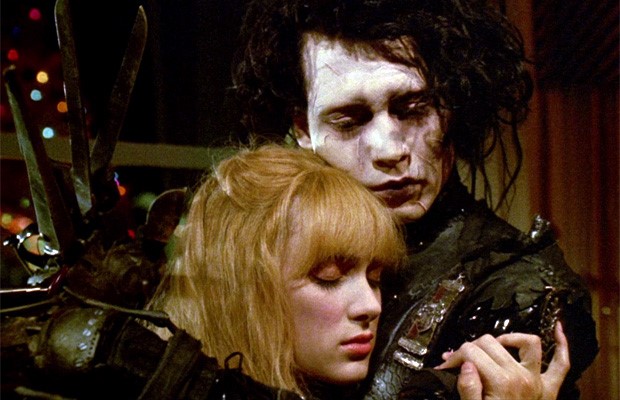 I’ve dressed up as the Coraline doll a few times for Halloween – any excuse to wear a yellow raincoat!

Do I need to say spoiler alert if I talk about the ending of a movie that came out 24 years ago? I will just in case – ***SPOILER ALERT***

Ok, let’s talk! Casper shouldn’t be a kids’ movie, kids’ movies should have a happy ending right? This is like if in Beauty and the Beast the Beast dies despite Belle crying and saying she loves him. Not cool. Not cool…

But still, a classic and a must see this Halloween. Just keep some tissues nearby.

Growing up I was TERRIFIED of clowns thanks to my older brother who let me watch IT with him when I was only 5 years old – thanks bro! Even now I’m still scared of clowns but I got over how terrifying Pennywise the Dancing Clown is thanks to The Rocky Horror Picture Show! To see Tim Curry (aka Pennywise in the original IT movie) dancing and singing in fishnet tights and heels as Dr. Frank-N-Furter made it impossible for me to take Pennywise seriously again.

This cult classic is a must see, not scary, but great fun! 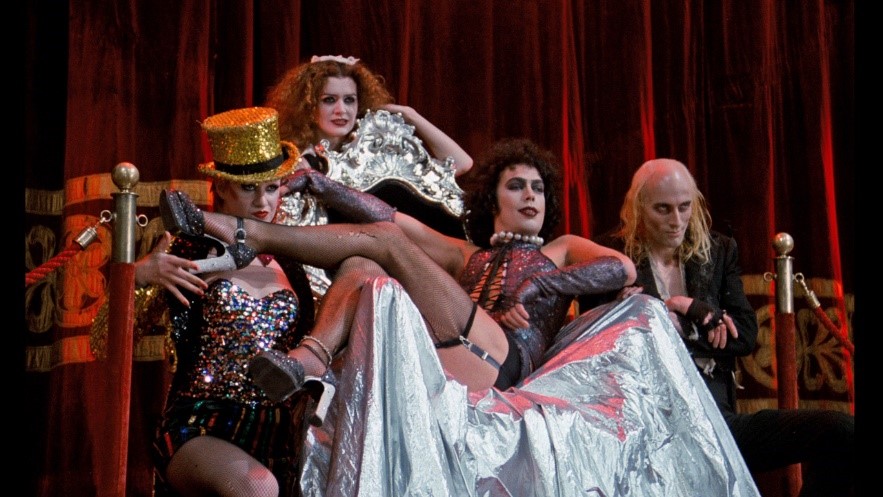 Check our IT – The Movie merch here.

Absolutely terrifying, still makes me jump despite how many times I’ve seen it.
Even scarier when you find out it’s based on real life events and start reading all the urban legends about the set and the movie itself being cursed… 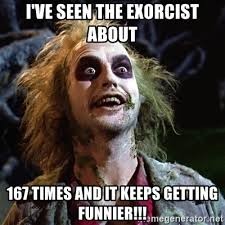 Once again thank you Tim Burton for another brilliant movie! Beetlejuice turned 30 last year and it’s still a must see! And what a cast: Michael Keaton, Alec Baldwin, Catherine O’Hara (the mum from Home Alone in case you didn’t know) and Winona Ryder as Lydia are simply amazing! And it gives us so many ideas for Halloween costumes… 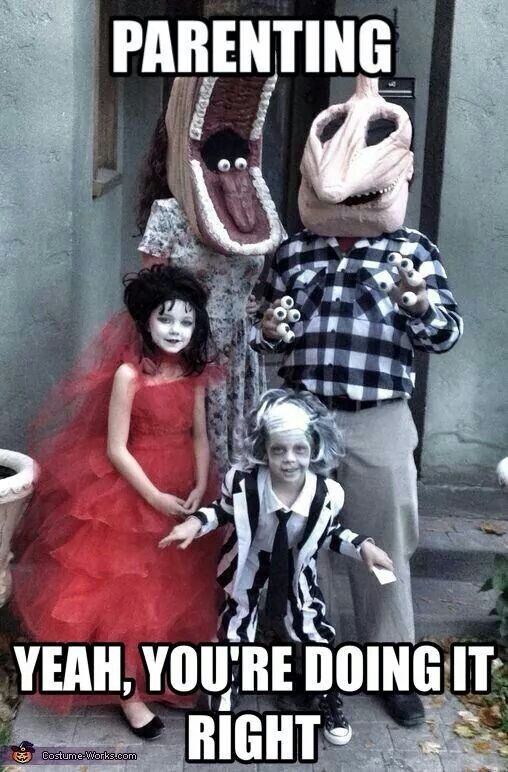 Donnie Darko is one of my favourite movies of all time! And my huge crush on Jake Gyllenhaal doesn’t even play a part in rating this movie so highly! It’s simply brilliant… From the film’s story to its incredible soundtrack, cast and acting. 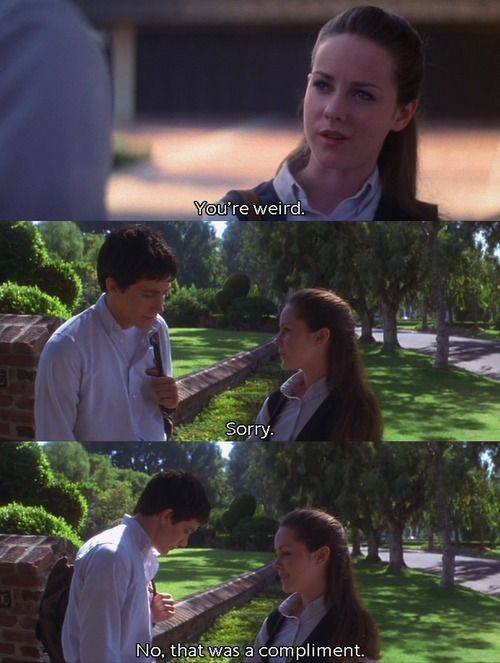 And without forgetting all the James Wan movies like The Nun, The Conjuring 1 & 2, Insidious 1, 2 & 3, Annabelle 1 & 2, Lights Out and all the Saw films. This man is an evil genius!

What about you? What are your must-see movies to watch in the run-up to Halloween?
We haven’t listed them? Comment below.

Popcorn ready? Have you checked under the bed and in the wardrobe? Everything clear?
Good let’s start this Halloween movie marathon.