After what felt like a lifetime without festivals or live music, here at EMP we were finally able to make our return this year! One of the awesome live events we had the pleasure of attending was Slam Dunk 2021 and what an experience it was!

Slam Dunk South was once again at Hatfield Park this year and had an incredible lineup from the likes of Don Broco, While She Sleeps, Bury Tomorrow, Skindred and more! You could really feel the joy and relief many attendees had with the return and because of the long wait, it made it feel that much better!

Check out our ‘Festival 21′ highlights on our Instagram stories now to see our best moments from the performances!

While rocking out with all these amazing bands, we had the pleasure to chat with some of the acts from the festival too!

Elena Marastoni from EMP first caught up with Isaac Cooter and Michael Evans from For You The Moon who has recently been signed by Slam Dunk Records and opened up The Key Club stages this year! While talking about some interesting topics like great tv-series and videos games, we also spoke about new music, collaborations and their new single ‘eightfortyfive’!

And we didn’t stop there! Derek Sanders and Alex Garcia from Mayday Parade stopped by for a chat, and we hoped to get a few details on their new album! As well as if they would prefer to live through a Zombie Apocalypse or an Alien Invasion. It was a tough decision!

Lastly, we spoke to Chris #2 from Anti-Flag to get an insight on the messages behind the band’s music, tips for new artists and what he’s been listening to recently. It was such a pleasure to speak to this incredible artist before getting to watch the band’s awesome set!

Thanks again to Slam Dunk for having this year and to all the artists who sat down with us for their interviews! It was a great experience, and we can’t wait to return for 2022!

Did you attend Slam Dunk 2021? Let us know your favourite performance on our socials and don’t forget to follow us for more exclusive interviews and news! 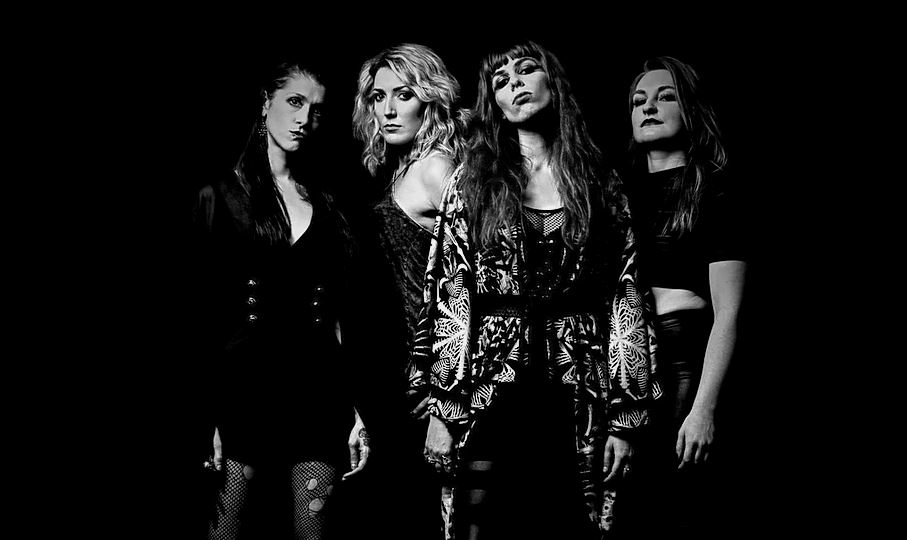 We had the pleasure of interviewing Hannah Staphnill, guitarist of HAWXX – an amazing all-female up and coming band!

Named after the bird of prey, with the double XX symbolising the double XX female chromosome. HAWXX write songs that reflect the lies of our current political climate, about self empowerment and how love’s a bitch.

Read the interview below and make sure you check out their new single ‘Deadlands‘!

We’re missing each other! Getting very jealous of bands where members live together. We want to play and eat and drink together again!
Other than that, a mixture of fine and terrible.

We want to hug each other, IN A PUB, and then get on stage!

How did it feel to win the PRS Women Make Music Award?

Genuinely screamed when we found out – it’s such an honour and amazing to think they see that potential in us – their support means a lot.

You’ve recently released your latest single ‘Deadlands’, what has the response to it been like so far?

It’s been great! It’s probably had the biggest number of streams within the first couple of weeks than any other track. Seems to have really resonated with our Israeli fanbase as the last I checked we had 1k listeners in Israel alone! It’s been great to see people connecting with the track.

Which of your latest singles is your favourite and why?

I guess we shouldn’t really have favourites as good song parents!

The band has so many influences! We are all lovers of all things heavy like Gojira, Deftones, Meshuggah and Tool but there is also a big influence from singer songwriters/poets in terms of lyrics and melody like Kate Tempest, PJ Harvey, Anna Calvi and Patti Smith.

If you could be a superhero for a day, who would you be and what would you do?

I mean..if we didnt do something about Corona, we’d be dicks. Anti-viral Girls?

Do you have any favourite TV series that you could recommend to us?

I’m watching John Oliver‘s Last Week Tonight weekly, catching up on Walking Dead. Not a TV Series but I’ve just completed Lifers podcast with Ed Gamble on Spotify – he talks to musicians about their lives in the metal world and would def recommend that- really interesting.

Are any of you gamers? If so, which games do you play?

I’m in to my retro games on my Raspberry Pi – did a whole evening of drinking and Street Fighter recently. I’m from the school of mashing the buttons until something happens.

A lot of social media action! We’ve been coming up with creative ways of getting HAWXX out there now that we’re not gigging so do follow us! (@hawxxmusic)

You can also expect a few more singles and hopefully an EP launch on October 8th at The Black Heart, Camden.