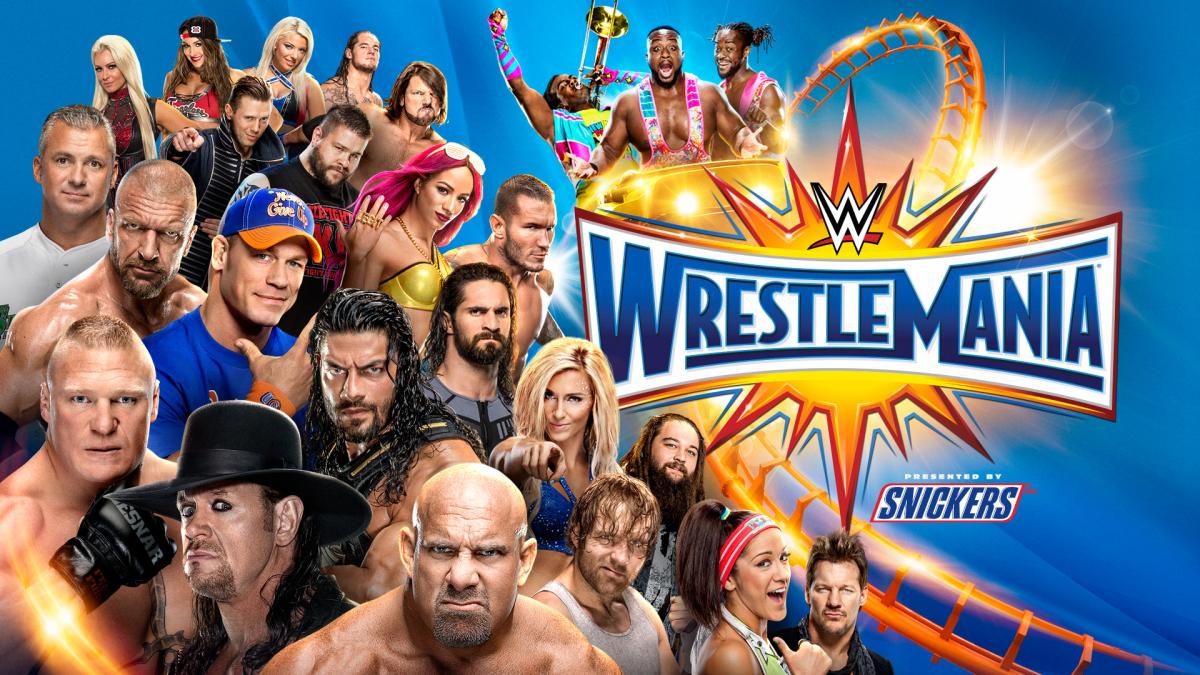 Who’s walking out of Orlando with gold? Who’s having a “WrestleMania moment”? EMP’s predictions are right this way…

It’s that time of year again! WWE’s annual celebration of all things rasslin’ has arrived, as around 70,000 rabid fans are predicted to pack the Citrus Bowl in Orlando, Florida for WrestleMania 33. Anybody with the slightest interest is sure to find something to enjoy – there won’t be a dry eye amongst old-school fans as Kurt Angle finally takes his rightful place in the Hall of Fame after having to endure years of wrestling in a theme park. NXT TakeOver will showcase the company’s future stars, having arguably topped its big brother last year. Aaaand of course, there’s the granddaddy of them all, WrestleMania itself, an epic five hour (seven if you count the pre-show)-long extravaganza showcasing every major star in the company in thirteen epic battles. A lot’s at stake – championship gold in some cases, pride in others, and in one case, a big gold André the Giant. Who’s winning? Here’s what we think…

Intercontinental Championship: Baron Corbin vs. Dean Ambrose (champion)
These two need to pay off a buildup which has featured an above-average amount of forklift action by having a wild vehicular hardcore brawl. Baron’s the future, and I’m picking him to put Dean down.

SmackDown Women’s Championship: Naomi vs. Mickie James vs. Becky Lynch vs. Carmella vs. Natalya vs. Alexa Bliss (champion)
Who’s got the edge? I think we’re due a surprise due to WWE’s insistence on billing this match as “Alexa defending against every available woman” – Asuka? Eva Marie? Paige? Beth Phoenix? Regardless, I’m going with the mighty Carmella – she’s formed a cracking double act with 2016’s least likely breakout star, James Ellsworth, who’s going to throw everything he’s got (which doesn’t amount to a lot, admittedly) at making sure his “friend who’s a girl” walks out with the strap. F-A-B-U-L-O-U-S.

Ladder Match for the Raw Tag Team Championship: Enzo Amore & Big Cass vs. Sheamus & Cesaro vs. Luke Gallows & Karl Anderson (champions)
Enzo’s already got his WrestleMania moment sewn up – hearing the best part of 100,000 fans chanting along to his pre-match schtick is going to be unlike anything witnessed before at the event. But is that going to be enough to carry them to the titles? I’m going with yes.

John Cena & Nikki Bella vs. The Miz & Maryse
It’s down to some sterling work from all involved that this doesn’t feel small-time in comparison to the Cena/Undertaker match we were rumoured to be getting. Miz is approaching godly status on the microphone and, by virtue of actually getting booed consistently, is probably the top bad guy on the roster. That’s why he and Maryse are taking the win via some rule-breaking shenanigans.

Fatal Four-Way Elimination Match for the Raw Women’s Championship: Charlotte Flair vs. Nia Jax vs. Sasha Banks vs. Bayley (champion)
If we don’t get fifty 100ft tall wacky waving inflatable arm-flailing tube men, then it’s an absolute travesty. As for the match itself, it’s a tough call – but because it’s WrestleMania, home of the feel-good wrestling moment, my money’s on Bayley.

Roman Reigns vs. The Undertaker
Whether you’re vocally anti-Reigns, or you think a lot of the boo-boys in the crowd are joyless basement-dwellers who would’ve turned on Hulk Hogan in the ‘80s and Steve Austin in the ‘90s if today’s internet had been around then, there’s no denying that last year’s sight of Reigns lifting the WWE Championship amid glorious victory fireworks, rabid announcer praise and 100,000 people loudly booing wasn’t the ideal end to the biggest show of the year. Which makes the E’s choice to go with Roman as Undi’s opponent this year rather than the more obvious John Cena a puzzling one. Roman wins, he gets booed out of the building; Undi wins, and the young buck set to carry the company for the next decade has just gone down to a bloke in his 50s. But there is a third way (and perhaps I’m going with heart over head over this): unconscious ref – low blow – Roman thwacks Undi with a chair – new ref – 1, 2, 3, EVIL REIGNS STANDS TALL, LAPPING UP THE BOOS. Make it happen.

United States Championship: Kevin Owens vs. Chris Jericho (champion)
Jeri-KO’s bromance gone bad comes to a head here, and though I would consider myself a “friend of Jericho” and think Y2J’s renaissance has been great viewing, the logical conclusion is for the dastardly KO to put his former best friend down here.

AJ Styles vs. Shane McMahon
Shane takes a beating like nobody else and after the year he’s had, there’s no way AJ isn’t a) walking out the victor and b) having the match of the night. Strap yourselves in, this one’s going to be phenomenal.

Non-Sanctioned Match: Triple H vs. Seth Rollins
You’ve got to admire Seth’s gumption for showing up, but – come on, mate. Hunter’s going to tear that gammy leg off and beat you around the head with it. And if Samoa Joe shows up to give daddy a hand…well, it was nice knowing you, Rollins.

Universal Championship: Brock Lesnar vs. Goldberg (champion)
Goldberg was the biggest star in the company from the moment he walked out on the October 17 episode of Raw, and that’s broadly who a show’s top belt should always be on, regardless of whether they show up every week to trade near-falls with Cesaro. But he’s had his comeback story now, and though every second of it has been wonderful, it’s time for Brock to wrestle top spot back from his old rival.

WWE Championship: Randy Orton vs. Bray Wyatt (champion)
Six months ago, I assumed we were in for another four weeks of Bray bothering another fan favourite, talking vaguely mystically about how “it was always meant to be this way” or some other gubbins before staring at the lights for said fan favourite on a secondary pay-per-view. But no, the six-month build to get here has been perfect sports-entertainment, and proof that storylines are what’s needed to create a buzz, rather than endless 45-minute technical clinics between two men in pants who respect each other but want to find out who the better man is (as some dark corners of the internet would have you believe). Hopefully Bray takes the victory here – Randy doesn’t need it – and the end-of-Mania fireworks budget goes on some weird festival of darkness where he uses his new magic powers to bring on a thunderstorm and hundreds of sheep-masked extras dance and sacrifice a viper. Hopefully.

Are you looking forward to WrestleMania? Who’s walking out with a victory, and who’s not walking out at all? Will there be any surprises? Let us know what you think in the comments below or on our Facebook page, and check out our WWE merchandise page to score some kick-ass wrestling merch! See you Sunday!