Looking Back at “The Walking Dead” Season Seven 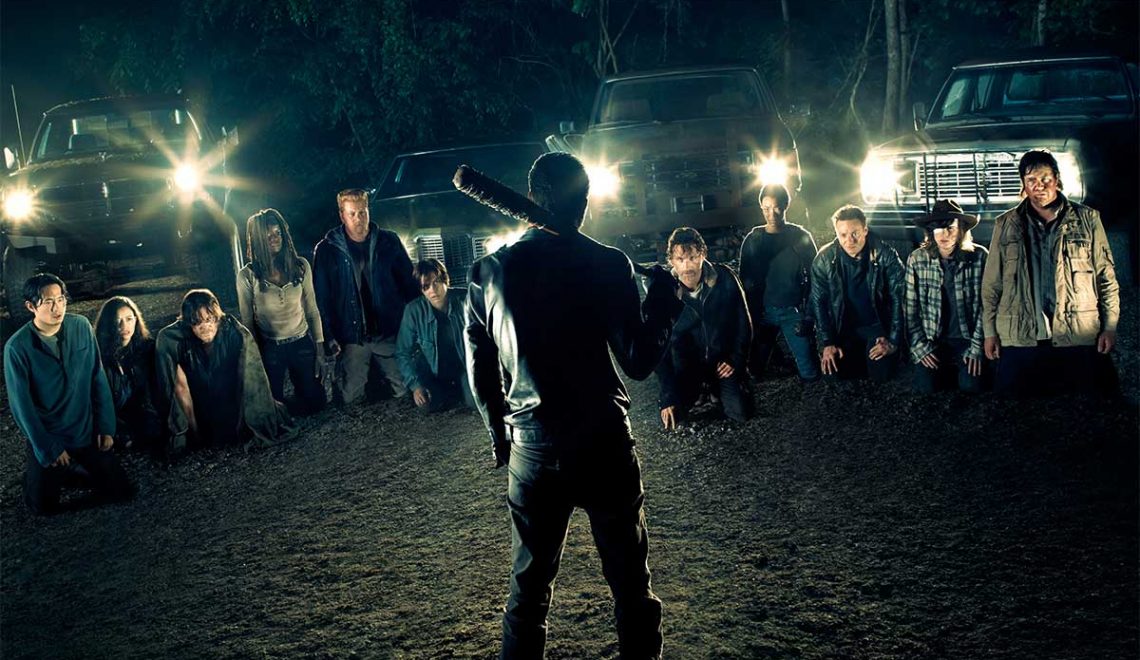 Season 7’s done and we’re feeling pretty low about it. Let’s reflect on an epic series and assess the post-S7 landscape…

First of all: WOW! Last night’s episode was intense! In the afterglow of an epic finale, I’ve been reading and hearing various opinions about the season, in particular its deliberately drawn-out buildup to the much-anticipated battle between Rick and his group and Negan and the Saviours.

It seems that two schools of thought currently divide TWD fandom. Firstly, there are those that loved the season and appreciated the build-up to the battle shown in “The First Day of the Rest of Your Life”, loving the emotional path the group went thought in the process to RISE UP against Negan once and for all.

Then there are those unhappy with the long wait and the ‘slow’ episodes, who think that the first battle of this ‘new’ war against Negan and the Saviours could have been stretched out over two episodes – they stretched the preamble to fifteen after all!

Which side are you on? Those that loved the slow buildup, or those that wanted Rick and his comrades to hurry up and take the fight to the Saviours?

Take two The Walking Dead fans, one in camp A and one in camp B, however, and you can guarantee that they’re sure to have one thing in common – love for NEGAN!

Even if we all resent him for killing Glenn and Abraham (I do! Glenn has been my favourite character ever since he called Rick ‘dumbass’ on the tank’s radio 😂) we love his character ‘cause it’s brought so much charisma, humour, charm and entertainment to the table! Let’s face it, Negan is (for now) the new star of the show, dethroning Rick and even Daryl; viewers can’t wait to see him in action, even if they know it probably means that one of their favourite characters is going to die brutally.

“The First Day of the Rest of Your Life” kept us guessing ‘til the very last minute. My thoughts were jumping from “Yeah, they’re going to make it this time!” to “Oh no, they’re all going to die…” to “HELL YEAH, kill them all, big fluffy cat!”

Rick and Negan’s exchange as Negan threatened to kill Carl with Lucille left me breathless. Andrew Lincoln’s performance was flawless; check out the rage in his eyes below! As much as it has built up to an all-out war between the Saviours and Rick’s group, the season has also built up to Rick and Negan going nose-to-nose and I think it was worth the wait!

The final scenes of the episode, with Maggie talking about how they all got there thanks to Glenn saving Rick at the very start, got me pretty bad. RIP Glenn 🙁

BUT enough with the sentimentality, it’s time to go to war!

I personally liked this season and appreciated the ‘slow’ build. Without it, we couldn’t have enjoyed all of the emotional scenes that led each character to join the battle. Daryl and Carol, all Morgan’s crazy stuff, Daryl and Maggie, Sasha and Rosita, Sasha and Eugene, Rick and Michonne…their combined histories and emotional baggage leading them all to declare war on the Saviours is what made the last episode so intense and moving for me. Sasha’s sacrifice and Glenn and Abraham’s tribute were just the perfect way to close that big chapter of emotions and grieving that accompanied season seven; now let’s get ready to kick some ass in season eight!

Negan and the Saviours retreated thanks to the combined intervention of King Ezekiel (plus his tiger) and the Kingdom and Maggie and the Hilltop. But they’re not certainly defeated and they’re sure to come back stronger – but how soon into the next season will it happen?

What are your expectations for season eight? Is Eugene going to find some courage and do something to help the others? Is Dwight really going to help Rick and Daryl in taking Negan (and all the other ‘Negans’) down?

Comment below with your opinions on season seven overall and the season finale, and let us know your wishlist and predictions for the next season – in a few months we can see who was closest 😉

Season seven may be over, but we’ll never stop bringing you the very best The Walking Dead merchandise! In our range, you’ll find Glenn resurrected in Funko Pop! form, exclusive TWD t-shirts and dresses and plenty more – check it out!